Pushing to the Limits: Understanding Lane Margining for PCIe®

PCI-SIG has built its reputation on delivering high quality PCI Express® (PCIe) specifications that have doubled bandwidth on average every three years, while maintaining full backwards compatibility with prior generations. This is no easy task, and as an organization, we continue to innovate in order to meet the performance requirements of our members and the industry within the power, cost, and high volume manufacturing constraints.

When we set out to design the PCIe 4.0 specification – which doubled bandwidth from 8 GT/s to 16 GT/s per Lane while maintaining backwards compatibility – we realized that system designers would need to know how much signaling margin was actually available in their design in order to squeeze out full 16GT/s performance while taking into account channel loss limits. Of course, while robust high-speed signaling simulations would be required to ensure proper designs, we felt that a test which could be run in the actual physical system would provide confidence on the reliability of the system.

A number of different factors contributed to the determination that we needed to address actual in-system margin in order to meet our goal of delivering a reliable 16 GT/s solution to the industry.

To overcome the challenges outlined above, PCI-SIG added a feature formally called “Lane Margining at the Receiver” (but commonly referred to as simply “Lane Margining”) in the PCIe 4.0 specification. Lane Margining enables system designers to measure the available margin in a standardized manner. It is now a mandatory feature, implemented at the Receiver – this is the moment of truth – how much margin is available at the Receiver. Lane Margining allows the system to determine how close to the “edge” (of functionality) each lane is capable of operating under real conditions. Conceptually, imagine that to calculate margin, the receiver moves its sampling point around within the signal eye, to determine its width (and possibly height). See the image below for an example where the actual signal eye is asymmetric – with 10 sampling “steps” available to the right before failure, and 20 sampling “steps” to the left before failure. This data allows the designer to evaluate the amount of margin before the design begins experiencing errors, thereby allowing delivery of a more robust system while better meeting time-to-market goals. 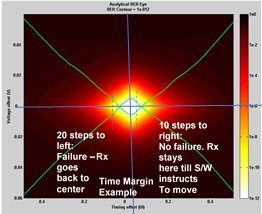 To recap, some key features of Lane Margining include:

As we put the finishing touches on the PCIe 5.0 specification – once again doubling bandwidth from 16 GT/s to 32 GT/s – Lane Margining continues to remain a critical component of PCIe’s successful adoption by the industry.